Want to see something published here? Send an email to inlineskating 'at' gmx 'dot' com

From Inline Skating
Jump to navigation Jump to search

A man inline skating at Vondelpark in Amsterdam.

Inline skating is a multi-disciplinary sport and can refer to a number of activities practiced using inline skates. Inline skates typically have two to five polyurethane wheels, arranged in a single line by a metal or plastic frame on the underside of a boot. The in-line design allows for greater speed and maneuverability than traditional (or "quad") roller skates. Following this basic design principle, inline skates can be modified to varying degrees to accommodate niche disciplines.

Inline skating is commonly referred to by the proprietary eponym "rollerblading", or just "blading", due to the popular brand of inline skates, Rollerblade. 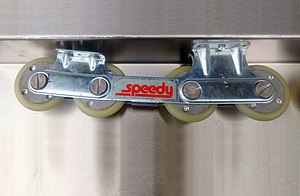 The German branch of SKF developed and produced inline-skates in 1978 with wheels for hockey or for the street. The product was stopped after one year as the management did not want a consumer product in its portfolio.

Other inline skates were developed as a substitute for ice skates, Life (magazine)|Life magazine published a photo of American skater Eric Heiden, training for the 1980 Olympics, using such skates on a Wisconsin road.

In 1980, a group of ice hockey players in Minneapolis, Minnesota were looking for a way to practice during the summer. Scott and Brennan Olson formed the company Rollerblade, Inc., to sell skates with four polyurethane wheels arranged in a straight line on the bottom of a padded boot. They sold the company in 1984 to Bob Naegele jr., who advertised to the general public and sold millions.

Aggressive skating (referred to by participants as rollerblading, blading, skating or rolling) is a sub discipline primarily focused on the execution of tricks in the action sports cannon. Aggressive inline skates are specially modified to accommodate grinds and the jumping of large gaps. Aggressive skates are identifiable by a prominent gap in between the second and third wheels (known as the H-Block) which allows for grinds perpendicular to the direction of the wheels. A hard plastic surface on the sole of the boot known as a "Sole plate" or "Soul Plate" allows grinds parallel to the direction of the wheels. From these grind surfaces comes a lexicon of well known grind stances, though sliding can occur on any surface of the boot or wheels. Aggressive skates typically have much smaller wheels than a traditional inline skates. The small size allows for more freedom when grinding as there is less risk of catching on obstacles. Additionally these small wheels feature a flat profile to accommodate the impact from jumping tall heights.

Park skating refers to doing tricks within skateparks, meaning a space that is designed for skating, designed and laid out as such. Street skating specifically refers to tricks performed on non-allocated obstacles (i.e. not skate parks). 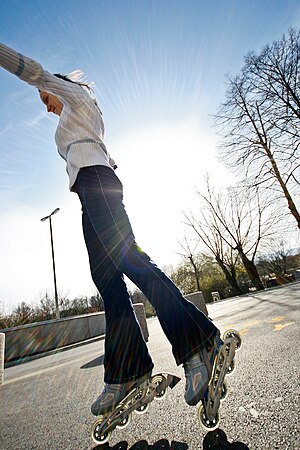 Artistic roller skaters use either quad or inline skates. The sport looks very similar to its counterpart on ice, but more affordable in warmer climates. Inline figure skating has been included in the world championships since 2002.

Recreational skaters usually skate on roads, bike lanes, or paved trails. They might be skating solo for transportation or fitness, skating with friends, or participating in an organized event. Because urban areas tend to have more hazards from traffic, many cities have organized social groups to make skating safer.

Fitness skaters tend to skate more frequently and go longer distances. Fitness skates typically have faster bearings and larger wheels to generate speed and cover ground more efficiently. Skaters in this category tend to skate 10-15 mph on average. Some challenge themselves to feats of endurance skating for 30+ miles.

Freestyle skating is a form of inline skating performed on flat ground and refers collectively to the disciplines for which competitions are organized by the International Freestyle Skaters Association. Currently IFSA has defined three disciplines which must be offered by any competition they sanction: freestyle slalom, speed slalom, and free jump. Two additional disciplines, high jump and jam, are also defined, but are at present considered optional.

Freestyle slalom skating is a highly technical field of roller skating that involves performing tricks around a straight line of equally spaced cones. The most common spacing used in competitions is 80 centimetres (31 in), with larger competitions also featuring lines spaced at 50 centimetres (20 in) and 120 centimetres (47 in).

Most freestyle slalomers use inline skates, although some use quad skates. Those who use inline skates tend to use a full rocker wheel configuration, however there are other variations of the rocker set-up which are used. Some skaters prefer to use a 'full hi-lo' rocker, which means the largest wheel is the second in from the back, with the smallest at the front. A common way to rocker your wheels is by putting larger wheels in the center and smaller wheels on each end. An example of this is having 80 mm wheels in the 2nd and 3rd position and 76 mm in the front and back. A short frame (230–245 mm) is used to give the skate the maximum possible maneuverability. Inline skates used for slalom have a very tight fit with a strong cuff, to give sustained ankle support. Popular skates used in the past include the FSK skate range by Salomon, now unavailable. The market is now arguably dominated by Seba skates, formed by a world class slalom skater; other brands such as Powerslide and RollerBlade also offer popular slalom skate models.

Hockey performed in a special rink on inline skates Originally thought up by ice hockey players who wanted to continue training in their off season. Hockey rollerblades have wheel sizes generally in the 72-80mm range. The toe end of the boot is characteristically squared off. The feel of the boot is generally the same as ice skates, so the switch off between hockey skates and hockey is diminished- leading to better in-training simulations of ice hockey.

Roller inline hockey, or inline hockey is a variant of hockey played on a hard, smooth surface, with players using inline skates to move and hockey sticks to shoot a hard, plastic puck into their opponent's goal to score points. There are five players including the goalkeeper from each team on the rink at a time, while teams normally consist of 16 players.

Inline hockey is a very fast-paced and free-flowing game. It is considered a contact sport but body checking is prohibited. However, there are exceptions to that with the NRHL which involves fighting. Unlike ice hockey, there are no blue lines or defensive zones in roller hockey. This means that, according to most rule codes, there are no offsides or icings that can occur during game play. This along with fewer players on the rink allows for faster game play. There are traditionally two 20-minute periods or four 10-minute periods with a stopped clock.

Internationally, inline hockey is represented by two different unions, the World Skate and the International Ice Hockey Federation. Each organizes its own annual world championships.

Nordic cross skating is also called Nordic inline skating or Off-road skating or Cross-country skating or Nordic blading. This sport activity (similar to roller skiing) combines snow cross-country skiing and inline skating. Typically uses specialized inline skates with two big all-terrain wheels (4-6 inch diameter, typically pneumatic) and special poles that the skater pumps like ski poles to make the skates go faster and provides a good workout for the majority of the major muscle groups, including upper body. Nordic skaters use a technique similar to the technique that cross-country skiers and inline skaters use. Nordic cross skating popularity is growing because of the range of fitness benefits.

Five-a-side football on skates taking place in an indoor sports hall or outside space with appropriate demarcation. The sport was created in the English Midlands in 1882 and the first documented match was a game between local rivals Derby and Burton on 30 January of that year. A 1934 game at London's Forest Gate Roller Rink, between two teams of female players, was filmed for an item on Pathé News. Over a decade later Billboard reported in 1949 that it had been revived in Detroit, having disappeared for more than thirty years.

The game re-emerged for inlines in San Francisco in 1995, when a group of friends on inline skates began playing soccer with a pine cone. They soon switched to using a football. By 1998, it was described as "well established in some areas".

The first Rollersoccer World Cup was held in London in 2003 and again in 2004 whereafter the tournament was rotated around the world with European and National events also emerging.

The country with most active players and the highest number of teams is France, with Marseille currently the holders of the most world titles. The sport is also played in Australia, Belarus, Belgium, Brazil, England, Germany, India, Russia, Scotland and Senegal.

A term used to refer to inline skates on a vert ramp, a half pipe with some vertical in it usually between 6in to 24in. Vert skating is a form of gymnastics performed with skates. The purpose of vert skating is to ride higher than the coping (which is the metal pipe on top of the ramp) and perform spins or flips. It focuses on complicated hard aerial maneuvers, such as spins and flips. The intent of the skater is to build speed until they are of sufficient height above the edge of the ramp to perform various aerial acrobatics. In competitions skaters have limited time, often less than a minute, to impress the judges by landing numerous and difficult tricks. Vert skating may occur in competition and was once part of the X Games. Vert ramps are also present in many skateparks.

Alpine owes its existence to skiing, because many skiers commonly practiced it in the summer months during its origins, as it helped them to train despite the lack of snow. Skaters complete a course marked by gates while descending at high speeds. Its basic movements are therefore similar to those of downhill skiing and many athletes regularly practice both modalities.